They'll be a Ha time in the old town …

It may surprise you, but it is an indisputable fact that San Francisco and it's surrounding areas have the best combination of amateur, semi-professional and professional comedy in the country. There are dozens of cafés to which literally hundreds of young, imaginative comedians from all the United States gravitate to entertain and be discovered. Why San Francisco and not New York or Los Angeles? Mike Pritchard, a well-known face on the San Francisco comedy circuit who has appeared on "Taxi" and "The Tonight Show" explains it this way,  "In San Francisco you can experiment. Anybody can get on stage and test out their material. By the time you reach Los Angeles you have to have a reputation. Somebody has to say 'Oh I heard he's funny." So, San Francisco is great for people just starting out."

The open door policy of the Bay Area comedy circuit all allows for a wide variety of comedy styles and material. Solo acts, teams of two, and entire groups numbering as many as six people perform everything from Chaplinesque slapstick to satires of Shakespeare. Recently, I had the pleasure of tagging along with several comedians. What I encountered were dedicated, hard-working, talented, underpaid individuals presenting some of the finest comedy an audience would ever hope to witness.

Improvisation is a very popular form of comedy in the Bay Area. Many groups exist whose members are extremely talented. One of the hottest groups is Femprov.  Femprov is different from other improvisational teams in that it is made up entirely of women. And unlike most female comedians, Femprov's five members, Pat Daniels, Jeannene Hansen, Susan Healy, Carol Roberts and Terry Sand, do not get bogged down with strictly female humor, which inhibits the universality of many comediennes. Femprov simply performs good comedy.

Unlike typical standup comedy, improvisation relies on audience participation. The members of the improvisational group will ask the audience to call out different situations. For example, the audience may be asked to name a place and an occupation, and then the group has to ad lib an entire, hopefully funny, skit based on those suggestions. Yes, Virginia there are easier ways of making a living.

Since improvisation depends so heavily on interaction with the audience it works best in a small, cozy setting. There are a number of clubs in the Bay Area where improvisation goes over well and the Holy City Zoo is one of them. The Zoo offers top-notch comedy, and Femprov appears there often.

Femprov opens with one of the few rehearsed pieces in there act, a song sung to the tune of "Can't Hurry Love," which welcomes you to the show. Upon finishing the song they catapult into the audience for ideas. It boggles the mind as to how these five people can, on the spur of the moment, produce one funny skit after another.

The truly interesting aspect of improvisation is that because it is based on audience suggestion the show can never be the same twice. But there is something that never changes — Femprov is consistently excellent.

So, the next time you're sitting at home complaining that you've done it all, pick yourself up and check out one of the Bay Area comedy houses. Treat yourself to an evening of hilarity that exists in your own backyard. 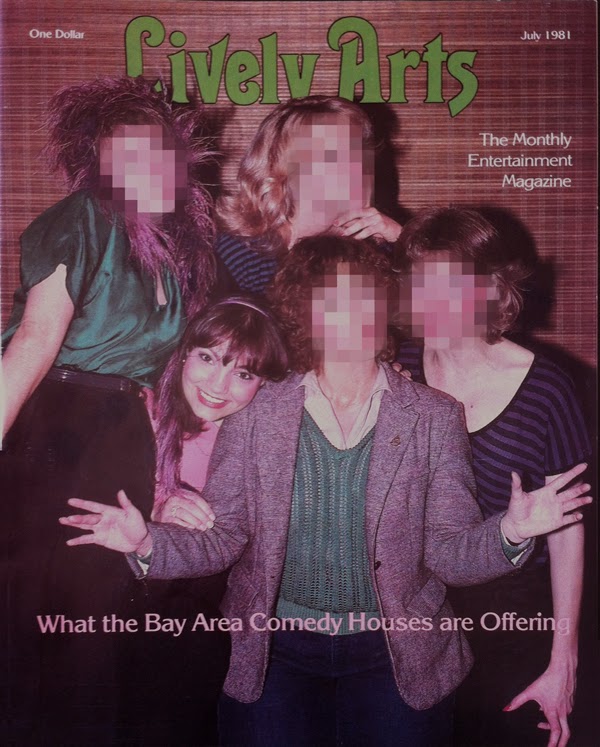 Note: Imagine our excitement when we were told we were to grace the cover of Lively Arts magazine! The photographer, Bob Oshetsky, took the group photo immediately after an evening's performance at The Other Cafe. High on another successful night, we did not factor in our 'glistening' and adrenaline-pumped look after our 2 hour show. A month or so later when the magazine was published and numerous copies were forwarded to us, our excitement dissolved into horror. The color cast was oddly pink and green, and except for Pat, we all looked as if we had been through the wringer, sweaty, flushed, wild-eyed, and over-mugging for the camera. Absolute.Horror.Show! The apt cover caption: Femprov— One of the hottest improvisational groups in the Bay Area. We were hot alright, Decathlon in Death Valley hot. We decided then and there, we would not include this image in future Press Kits, much less speak of it again. The show was great, as the writer attests, but the cover photo was an anomaly in the catalog of Femprov imagery. After all these years, we still remember it as "That Cover", and shudder a little. It is re-imagined here only to serve as historical proof of our first and only 'cover girl' experience.