For $4 you, too, and have them rolling in the aisles

San Francisco is a mecca for comedians. They come from all over the country to a town where comics drive cabs by day and perform in cabarets by night. All dream of being another Robin Williams.
It's a return to the 1950s when the hungry i was incubating newcomers Woody Allen, Lenny Bruce and Mort Sahl.

And now, for $4, you, too, can learn to be a comedian. Each Saturday afternoon Femprov offers a three-hour improvisational comedy workshop at Cobbs Pub, a saloon at Chestnut and Steiner streets in the Marina.
Femprov is an improvisational comedy group similar to the Screaming Memes and the National Theatre of the Deranged, both entertaining in spots around town.

To improvise is to invent, compose or recite without preparation. The actors come onstage, ask the audience for suggestions – a profession, situation, emotion, conflict – and wing it from there.

On a recent Saturday, 15 people went through the wringer, in teams of two and three. Two women were to concoct a scene involving a stewardess and tennis. They pantomimed, pretending to bang a wall. They talked the dialogue went nowhere.
Susan Healy, today's leader, signaled them to stop and said "You must be pooped with all that swinging. You really hit the ball that often? And where is the scene? Are you playing tennis inside a plane? You've kept the dialog flowing. But it's not witty and it doesn't develop the characters."
Four other Femprov members also critiqued the neophytes. They told them what they did right and where they went wrong.

Next, six people trotted onstage to do a spontaneous relay narration, an exercise in which one person picks up where another leaves off. Healy cued the speakers like a choir director.
It was a little like playing push-button on the radio, where by random pushing, you accidentally glue together some funny, incongruous lines.
Such as: "President Reagan said the poor and the hungry should try …" "… compulsive eating and discover alternative ways to nurture yourself and take charge of your life…"

The youngest person at the workshop was Rico Ramos, 21, an usher at Cinema 21. "I've been coming since it started," he said. "It's great. I have a captive audience."
Ramos, who came here from the Philippines when he was three, is all showbiz: "I love to entertain."
Sometimes he entertains during intermissions at Cinema 21. He was with "Teens in Theater" while in high school and in "California, Can you Beat It?," a Mayor's Youth Program musical.

It was raining that Saturday, but Susan Williams and Diana Aragavritz drove up from Santa Cruz to make a noon workshop. "I've been coming for for four weeks," said Williams. "It's a long drive, but I'm hooked."
Maria Kamiya, 27, a San Francisco State University student, comes to the workshop because "it's fun and it helps to build self-confidence."
Arlene Mellon, 40, a freelance writer, agreed: "I was walking by one Saturday and saw the sign. There must have been a full moon that day. I walked in and found a platform to express myself creatively and humorously."

Of the 15 people attending the workshop, only three were men. Besides Ramos, there were Les Cafero and T. C. Nurov who works with the American Cancer Society.
"Men are welcome … we want more men … we're not just for women … tell them our workshop is a great place to meet women," said various Femprov members.

The group got together in December 1979. "We're just starting our third year," said Terry Sand. "We come from different parts of the country, met in a comedy workshop and it was a magic combination."
They have appeared here, in Los Angeles, at Stanford and in Monterey.

"Improvisational comedy can be learned," Sand said "There are techniques. It's not that spontaneous."
Like jazz, there's a structure. It's how far out you can stretch before snapping.
Daniels commented that it would take six months to learn how to be comfortable working together.
The others disagree. "There's no time schedule. It's up to the individuals," said Hansen.
But everyone agreed that it's a coordinated, ensemble effort. "You have to work together as a team," Healy said. "You're all in one boat, pulling together."
If one is stuck the others step in "It's like a rodeo. You fall off and a clown waves to keep the bull away," she added.

Improvisational comedy is risky. When you hit, it's hilarious, but it's a pie in the face if you miss. The measure of quality is longevity. "You don't last if the audiences don't respond," she said. Femprov will be playing at the Great American Music Hall and the Holy City Zoo in April. 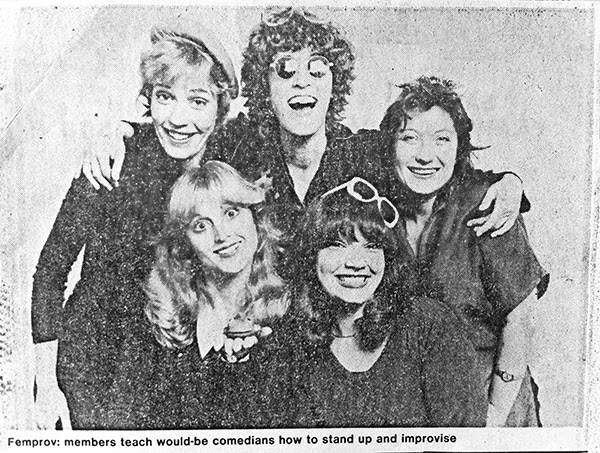